Placing nerve membrane in the feed-back arm of an operational amplifier allows one to see what current is needed to make the membrane follow a change in voltage across it. Such a measure, termed ‘voltage damp’, has been used for the giant axon of the squid by Hodgkin and Huxley(1). Their exhaustive study showed several specific non-linear ionic conductances the behavior of which accounted for the properties of the excited membrane. Whether all irritable tissues show qualitatively the same pattern and use the same ions is yet unknown, since Hodgkin and Huxley’s essay has been unique. We have now succeeded in devising voltage clamps for both the node of Ranvier and the cell body.

The first experiments were done with single, isolated motor-nerve fibers of Rana pipiens in springtime and at room temperature. These fibers were dissected from sciatic-gastrocnemius preparations following the method described by Tasaki(2) and Stämpfli(3). The isolated node was laid across a window cut in a 1-mm. (outside diameter) polyethylene tube through which flowed Ringer solution. The tube was separated by air gaps from glass slips on which lay the two adjacent nodes, N1 and N3, bathed in artificial intracellular fluid and even cut open to reduce the impedance of the path to the interior of the middle node N2. External shunts along the internodes were minimized by first bathing the preparation 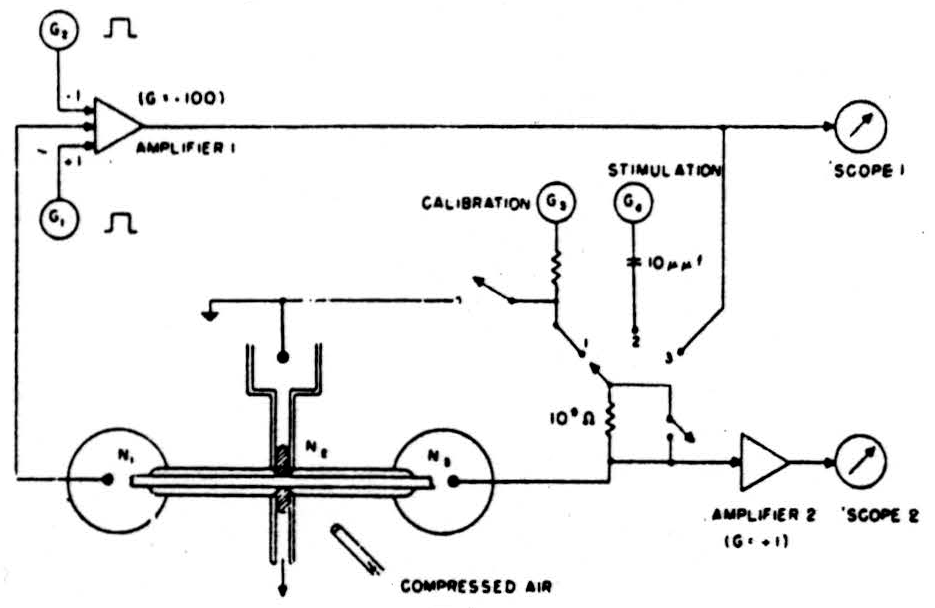 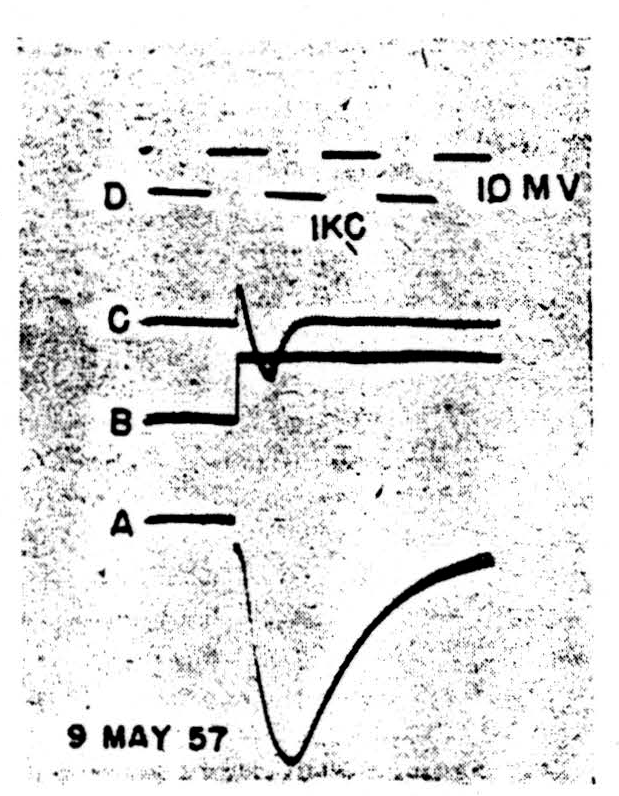 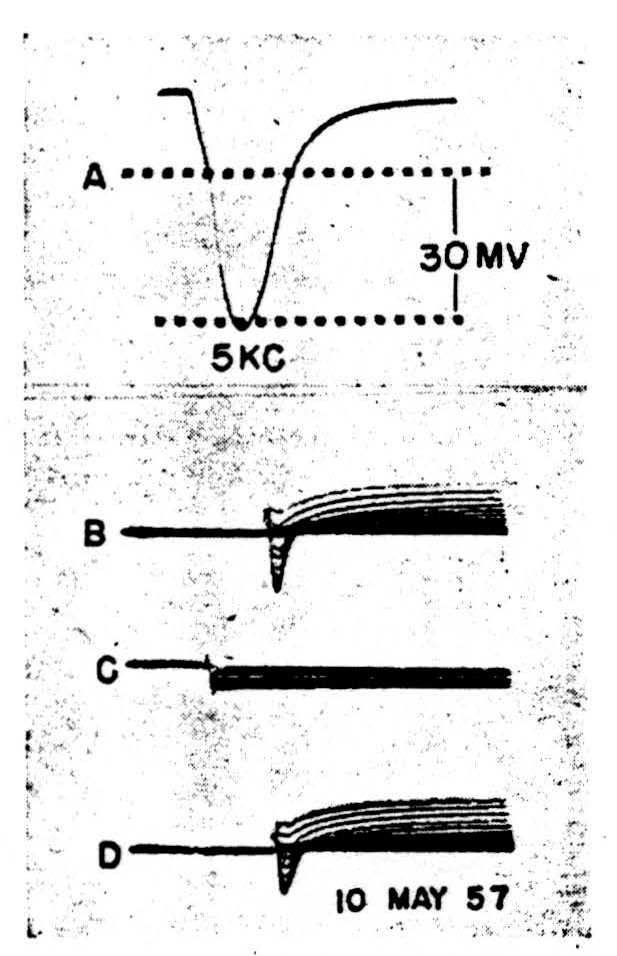 in isotonic sucrose and then playing a gentle air jet on the internodes after the gaps were made. A block diagram of both the mechanical and electrical systems is shown in Fig. 1. Our amplifiers were direct-coupled to the preparation through head stages emitting a current of less than 10-14 amp. and showing an impedance to earth better than 1014 ohms for direct current, and dropping to 109 ohms at 10 kc./s. ,

It seems that the monophasic action potentials which can be recorded from isolated nodes are of two sorts, one showing a smooth fall-away from the peak, the other a marked downward inflexion somewhere in the falling phase. This inflexion can occur sufficiently late to give a trapezoidal appearance to the spike, very like that seen in records from heart muscle. At present, we feel that these two shapes are connected with two different patterns of current flow under the voltage clamp. In the first case (Fig. 2) there is a spike, 2A, characterized by a smooth and nearly exponential fall of potential away from the peak. With a sudden depolarization of the magnitude shown in 2B (inverted during clamping by the feedback) we see the current transient, 2C. This appears to be a pulse of active inward flow of current which is turned off fairly sharply. The rapid decay of this inward current is to the base-line, indicating that little if any flow is required thereafter to keep the membrane at the new potential. There is not the slightest sign of an active outward current corresponding to the active potassium ion flow in the squid. Such behavior, true for all levels of depolarization in this possibly injured node, holds also for depolarization up to 20 mV. in nodes of the following sort.

In the second case (Fig. 3) the spike, 3A, shows a clear doubly inflected decline from the peak. The membrane was clamped to a family of voltage steps, cathodal in 3B, anodal in 3C and cathodal again in 3D. The maximum steps were the same for both polarities. Here, during cathodal clamps at increasing levels of depolarization, all superimposed to show the trend rather than specific quantitative relations, an active initial inward current changes rapidly into an active outward current, and the whole configuration resembles grossly that recorded from the squid axon save for the time-scale. Inward current reversals occur during large enough voltage steps, as is shown in the top record of 3B.

These results have been submitted prior to a longer study not only to show the feasibility of a voltage damp on nodes but also to indicate at least two sorts of behavior in isolated nodes.

This work was supported in part by the U.S. Army (Signal Corps), the U.S. Air Force (Office of Scientific Research, Air Research and Development Command) and the U.S. Navy (Office of Naval Research) ; in part by U.S. Public Health ; and in part by the Bell Telephone Laboratories, Incorporated, and the National Science Foundation.