M. A. Kennard and W.S. McCulloch

Until the second month, when voluntary movements begin, the motions of the infant monkey (Macaca mulatta) suggest that its cerebral cortex has little function. Some it must have, however, for cortical ablations cause some alterations of movement, and stimulation of area 4 at that age elicits some movements. Such responses to stimulation by induced currents from a Harvard coreless inductorium have already been reported from this laboratory(1), and responses to 60-cycle stimulation of the infant cortex have been minutely investigated by Hines and Boynton(2) at various stages from fetal life to the end of the first year.

However, facilitation, extinction and suppression of motor response to cortical stimulation had never been studied in the infant monkey. The type and location of stimulation required to demonstrate them in the adult monkey are well known(3). Briefly, at any motor focus repetition of appropriate stimulation at short intervals yields facilitation; at longer intervals, extinction; and stimulation of any suppressor area (e.g., 4-s or 8) prevents response to subsequent stimulation of all motor foci. Those foci for specific discrete responses occupy (Brodmann's) area 4, and those for complex responses lie in area 6.

Since these characteristics have been demonstrated unequivocally in a single experiment upon a monkey 20 days old, the results appeared worth reporting. They are the more significant because the infant was normal for its age in weight, behavior and in the electroencephalogram. It exhibited normal righting reflexes, stood and walked on a wide base. It clung, climbed and sucked readily, and exhibited forceful and sustained reflex grasping as soon and as long as the palm or sole was touched. Its EEG before anesthesia showed typical low-voltage waves at 4-5 per sec.

A 20-day-old infant monkey (Macaca mulatta), wt. 515 gm., was fully anesthetized with 0.16 cc Dial (Ciba), one-half intraperitoneally and one-half intramuscularly, and its cortex exposed for bipolar stimulation. Electrical pulses of controlled wave form, frequency and voltage were delivered by a stimulator having an output unaffected by the resistance between the electrodes. Motor responses were noted by three observers. Subsequently the cortex was locally strychninized and the induced electrical disturbance of the cortex recorded from bipolar leads, with a six-channel Grass electroencephalograph.

Areas yielding motor response. Bipolar electrical stimulation, even with impulses of abrupt rising phase and ten msec. falling phase, of relatively high voltage and of any frequency and duration, elicited motor responses only from the posterior margin of area 4 — not from its anterior portion, nor from area 6, nor from the postcentral convolution. Suppression of these motor responses was produced, with the usual latency of several minutes, by stimulation of area 8 above the sulcus arcuatus (Figure 1, pt. 51) and by stimulation of area 4-s (pt. s-1). The locations and sequence of stimulations are given in Figure 1, and the corresponding responses were as follows: 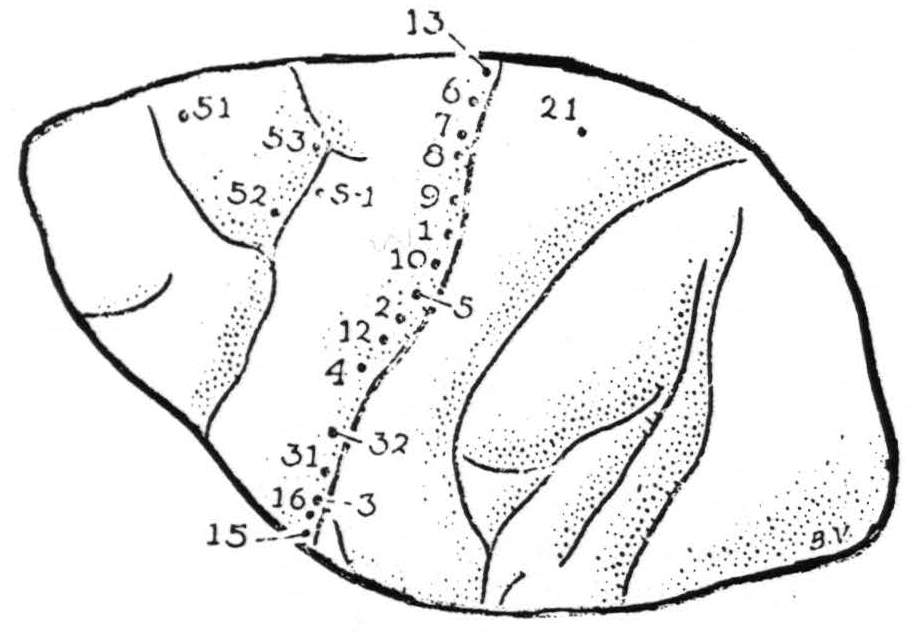 Character of Response. It should be noted that movements of the proximal portions of the extremities were elicited more easily and regularly than those of the distal parts; that responses of the face were well developed, those of the hand, thumb and finger, much less well defined and those of the foot and toes absent.

Compared with those obtained from the adult, the movements themselves were less constant, less discrete and slower in onset, execution and termination. Moreover, the threshold of motor foci was higher, no responses could be elicited even with long, high voltage pulses at 1 per sec. and the responses to 5 pulses per sec. were not prompt and separate, as in the adult, but late and fused. This is obviously due to facilitation which was easily demonstrated by repetition of stimulation with short intervals. With intervals of about 15 seconds there was total extinction of motor response.

The threshold for suppression of motor response, both in areas 8 and 4-s, was like that of the adult, and the motor after-discharge provoked by stimulation in area 4 was held in abeyance by application of the same stimulation to area 4-s (Figure 1, S-1.)

The responses to stimulation of the cortex of this three-week-old macaque indicated that area 4 is already capable of initiating those slow and ill-differentiated movements which are typical of its age. Nor is it surprising that these are obtained from area 4 which is first to develop and first myelinated. What is of interest is that among the descending systems the shorter (to face and even to hand) are nearer to adult performance than the longer (to leg).

Since facilitation and extinction of motor response have both been demonstrated in the infant cortex, the interpretation of the slow and only relatively discrete motions deserves consideration. Since, as judged by motor response, the threshold is higher, the lack of separate responses to pulses at 1 per sec. and the tardy and fused responses to 5 per sec. may be taken to mean either that synchronous discharges leaving the cortex reach the cord late, scattered and decimated, or that the threshold of the cells of the cortex is itself higher. The latter seems unlikely, for 4-s and 8 have normal thresholds, though they are developmentally behind area 4. If the former is the fact, then one would have to expect less discrete response because of facilitation of neighboring motor foci and perhaps partial extinction of the focus under the electrode. In this case the apparent lack of differentiation of the cortical foci need not imply any inactivity of cortical elements, merely a difference in the descending system. Be that as it may, the difference in the discreteness of motor response is not an artifact of stimulation, for the infant monkey in using its cortex would encounter the same difficulty. This is confirmed by the conformity of normal activity to that induced by cortical stimulation.

That removal of 4-s at any age gives rise to spasticity only after the first six months of life, and that excitation of 4-s even in the third week gives suppression, suggest that the as yet unknown structure whose unsuppressed activity would yield spasticity is not yet active in the infant.

The stimulable motor foci are confined to area 4 and no responses are elicitable from area 6 or the postcentral convolution.

Facilitation and extinction of motor response are easily demonstrable.

Relatively high voltages are required to elicit responses and these, like the spontaneous motions, are less discrete and slower in onset, execution and cessation than those of the adult. This may indicate either higher threshold in an as yet undeveloped cortex or less adequate corticospinal conduction.

Responses are more easily elicited in the face, less in the hand, and not at all in the leg.

Lack of response from area 6 is correlated with the forceful, sustained and easily elicited forced grasping normal for that age.

That suppression of motor response is elicitable from 8 and 4s at this age when removal of 4-s does not yet produce spasticity suggests the functional immaturity of that structure whose unsuppressed activity would give rise to spasticity in older animals.

Kennard, Margaret A. Reorganization of Motor Function in the Cerebral Cortex of Monkeys Deprived of Motor and Premotor Areas in Infancy. J. Neurophysiol., 1938, 1:477-496.