In a recent paper on “Physiological delimitation of neurons in the central nervous system”(1) the following statement was made: “This cortex showed, naturally, very little spontaneous activity due to the extirpation of its thalamus, by which procedure the cortico-thalamic-cortical circuits, necessary for the maintenance of the normal electrocorticogram, were destroyed.” Substantiation would have been out of place there; we, therefore, present it here.

Monakow(2) was one of the first to recognize the existence of numerous corticothalamic neurons besides the well-known, sensory thalamocortical ones. In 1895(3) he gave the first diagram showing the anatomical interrelation of the cerebral cortex and the thalamus. Subsequent experimental and clinical neuroanatomy have substantiated this finding (Kölliker, Déjérine, Flechsig, Bechterew, Minkowski, Poljak, Walker, Levin and others).

Head and Holmes(4) were the first to assign a function to the cortico-thalamic neurons, namely inhibition of the “essential centre” of the thalamus, i.e., of its medial nuclei which they presumed subserve the affectional side of sensation.

Other experiments gave evidence that excitation of the sensory cortex excites the sensory thalamic nuclei(8, 9, 10) and excitation of these nuclei excites the sensory cortex. In subsequent experiments it was established that local strychninization, or mechanical or electrical stimulation of a certain area of the sensorimotor cortex, area 4-s, results in a typical temporary suppression of electrical activity of other portions of the sensory cortex (area 4) and that this suppression is brought about via the caudate nucleus and the thalamus.(7) Thus the operation of cortico-subcortico-cortical circuits was established. In this paper evidence will be presented that the "normal" electrical activities of the cortex and of the thalamus, even in the narcotized animal and without any especial excitation depend upon the intactness of their mutual connections, the cortico-thalamo-cortical circuits.

All experiments were performed on monkeys (Macaca mulatta) anaesthetized with Dial.1 The electrical activity of the cerebral cortex was taken directly from its surface, i.e., the electrocorticogram (ECG) recorded, with bipolar electrodes feeding into a suitable amplifier and recorded with cathode ray oscillograph, Westinghouse oscillograph or inkwriter oscillograph (Grass). For simultaneous recording of the electrical activity of subcortical structures concentric needle-electrodes were used and their position checked at necropsy.

The problem is: What structures are necessary for the maintenance of the “spontaneous” electrical activity of the cerebral cortex, i.e., for the normal ECG, in the narcotized monkey?

It should be noted first that so long as the blood pressure or at least the blood supply of the brain can be maintained in the “decapitate” preparation, the electrical activity of the cortex appears unaltered. The term “decapitate” as here used means that the cord has been severed at the level of the foramen magnum. The same is found in the “decerebrate” preparation even when the level of section of the brain stem is above the superior colliculus. Figure 1 exemplifies these results. 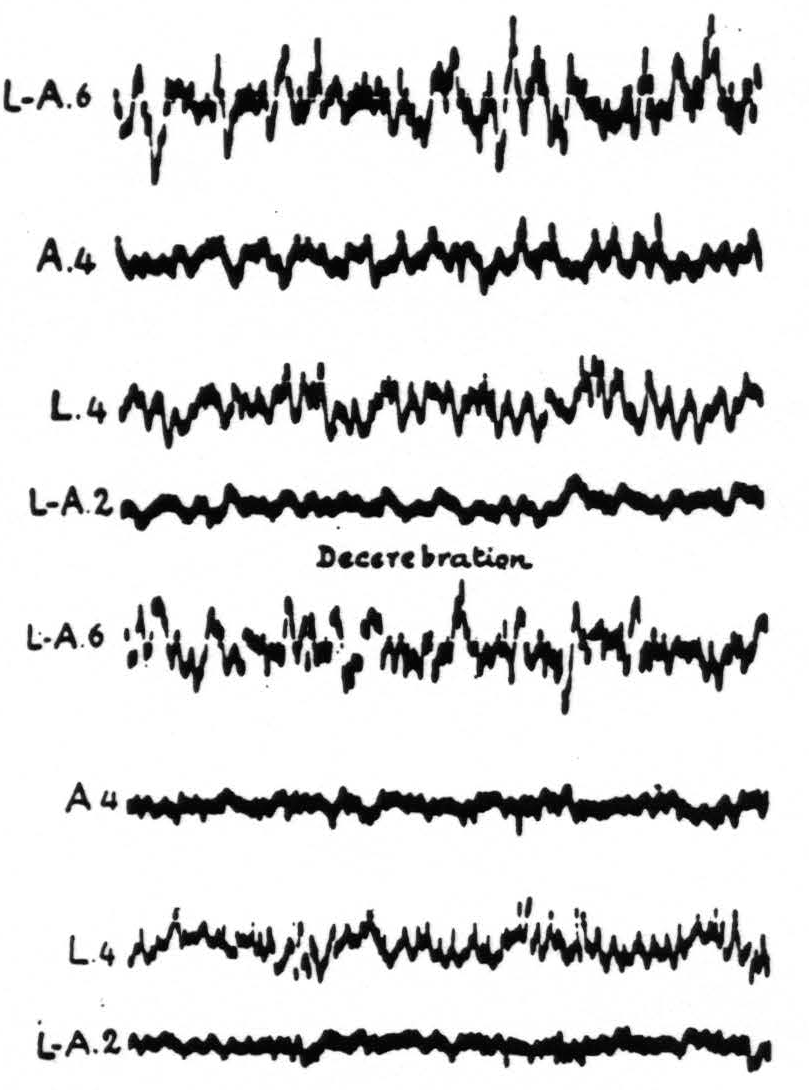 Similarly, division of the corpus callosum can be accomplished without significant alteration of the spontaneous electrical activity of the cortex. The only difficulties are technical. In our most successful attempts, the calvarium was removed bilaterally and section was made by retracting the hemisphere opposite to the one recorded so that the slight trauma produced by retraction would not cause a diminution of activity of the area to be examined.

Even in such a preparation the electrical activity remains if a small area from which to record is left intact and the rest of the cortex of the same hemisphere is removed subpially, i.e., by suction, leaving the blood supply to the remaining structures. Figure 2 shows the electrical activity recorded from the arm area 4 before and after subpial resection of various other cortical areas one after another until virtually all that remained on the convexity was the area recorded. This finding is confirmed by sectioning the cortico-cortical connections. Although the incisions pass all the way to the nucleus caudatus medially and the putamen laterally the activity is not significantly altered. Finally, gross lesions of the basal ganglia do not appreciably diminish the activity of the cortex. In fact, as has been stated elsewhere, even small lesions of the nucleus caudatus are followed by augmentation of activity for matter of hours. Here it should be stated that in no one animal have all of these lesions been made. However, so many combinations have been made that it is difficult to imagine any way in which this could lead to a false conclusion. 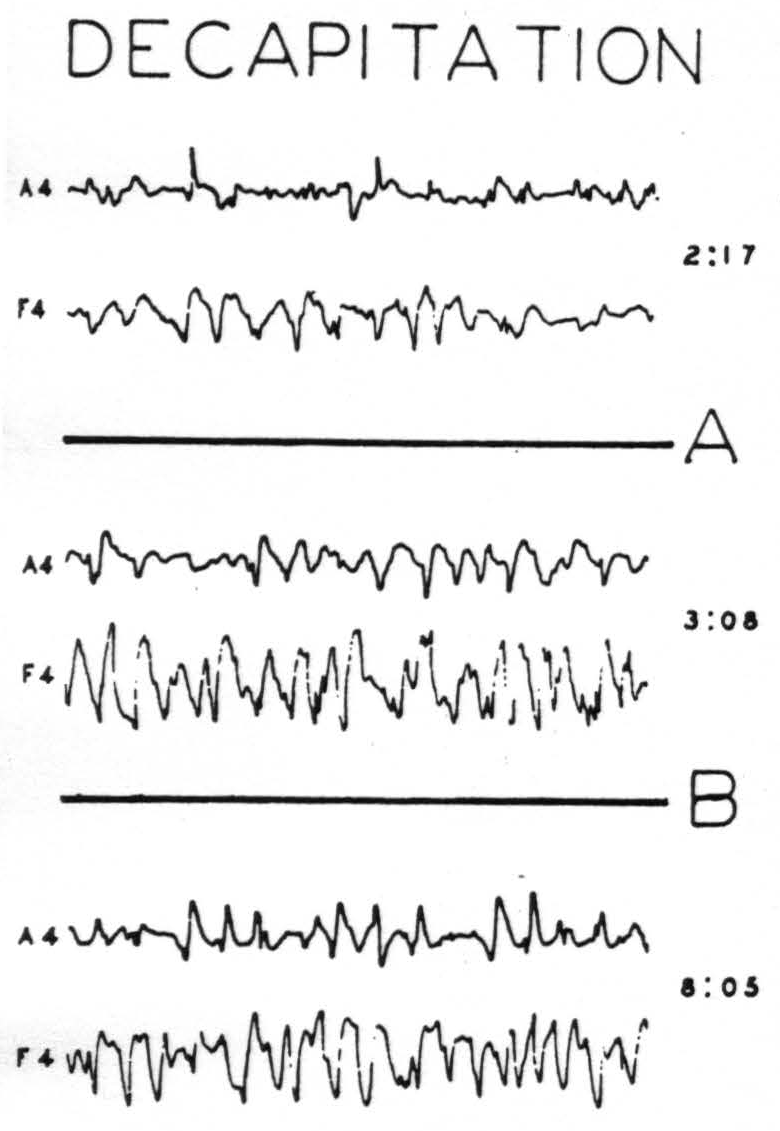 The results can, therefore, be summarized briefly. Essentially normal electrocorticograms can be obtained subsequent to any lesion or combination of lesions that does not compromise the cortical area whose activity is recorded, the thalamus or their interconnections.

When one asks not what may be destroyed and leave normal electrical activity in a cortical area, but what lesions prevent it, the following results are significant.

Obviously the entire cortex cannot be destroyed and an ECG obtained. In previous publications from this laboratory(11, 12, 13) it was shown that laminar thermocoagulation of all layers external to that of the large and giant pyramidal cells while temporarily obliterating almost all activity did not produce any permanent deficit or alteration, whereas thermocoagulations which included the layer of large and giant pyramidal cells and left only the polymorphic layer produced a permanent and profound reduction of electrical activity.

If one makes a lesion in the ventro-lateral nuclei of the thalamus which have been shown to be sensory(14) and which interrelate with the sensory cortex as mentioned above, then the corresponding subdivision of the sensory cortex shows a diminution of its electrical activity. Here it is important to note the lack of change in the ECG of other areas. Figure 3 exemplifies both findings.

Figure 3. March 18, 1938. Macaca mulatta. Dial. ECGs taken of right hemisphere before and 1 hour and 40 min. after lesion of leg-nuclei of right thalamus.

Next, if one severs the connections of the cortex and thalamus, by deep undercutting, the cortical activity immediately disappears. This is seen in Fig. 4.

It should be added that such deep undercutting leaves the blood supply of the cortex so good that its threshold to electrical stimulation, judged by the appearance of electrical after-discharge, is unaltered. One other result of such a lesion is of interest here, namely, that the electrothalamogram (ETG), in spite of the intact afferent tracts from lower levels, shows an almost equal reduction.

No animal with such an extensive undercutting has been kept for a sufficient length of time to determine how much activity might return. With a small lesion cortico-cortical connections might well be expected to play an important role in restoration of activity. Even in the acute experiment this supposition finds support, for the ECG of an area locally undercut is never completely inactive.

Nevertheless it was considered worthwhile to know what permanent alterations would follow from a relatively small undercutting of the sensory cortex. A lesion was therefore made under the medial half of arm area 4 and extending partly under leg area 4. This animal was kept for over 2½ years to allow complete retrograde degeneration to obliterate all cells whose axons

Figure 5. April 27, 1938. Macaca mulatta. Dial. Last ECGs taken 2.5 years after undercutting of A4 and part of L4 of right hemisphere. Animal at rest with its eyes closed showing alpha frequency circa 10 per sec. in normal structures.

had been severed. When the skull was opened the dura was not adherent over the areas to be studied. In order to be certain that the findings were not unduly influenced by anesthesia the cortical records were first obtained under light anesthesia with the animal's head securely clamped. Thalamic electrodes, with shields grounded, were then inserted and records were made from them. The monkey was allowed to come out from under anesthesia gradually and continued to lie quietly on the table. The records then obtained show an alpha rhythm from normal cortex and thalamus but abnormal activity from the cortex and thalamus which had been separated by undercutting 2½ years before. Figure 5 shows the location of the thalamic electrodes, and the last records obtained from this monkey resting undisturbed with his eyes closed.

Inasmuch as small lesions involving the deeper layers of the sensory cortex or the sensory nuclei of the thalamus or the tract through which these are mutually related cause permanent local abnormality and loss in spontaneous electrical activity of the corresponding parts of both cortex and thalamus, whereas no lesion or combination of lesions elsewhere does so it seems appropriate to regard these, and only these, structures as essential to that activity. Since excitation of either of these gray masses has already been shown to excite the other and neither can support “spontaneous” activity in isolation from the other, it is clear that the activity of either depends upon activity reaching it from the other. That is, for spontaneous activity, the sensory cortex and the optic thalamus are functionally interdependent.

When fall of blood pressure or other impairment of circulation is avoided, decapitation, decerebration, section of the corpuscallosum, and subpial resection of the entire cortex of the convexity of the hemisphere, save that area to which electrodes are applied, one and all leave the electrical activity unaltered. So also does destruction of sensory thalamic nuclei other than that corresponding to the subdivision of the sensory cortex whose activity is being recorded. Lesions of the basal ganglia have little or no effect on the activity of the sensory cortex or of the corresponding thalamic nuclei, except for a transient increase following injury to the nucleus caudatus.

On the other hand a lesion of the sensory thalamic nucleus corresponding to a cortical area under investigation and a lesion of the cortical area corresponding to a sensory thalamic nucleus under investigation, each results in a permanent abnormality and diminution of spontaneous electrical activity on the other. The same obtains when their mutual connections are interrupted.

Laminar thermocoagulation of the superficial layers has previously shown that the layers of the cortex external to that of the large and giant pyramidal cells are not necessary to the maintenance of the normal ECG.

1 Reprinted from Journal of Neurophysiology, 4: 304-310, 1941. ↩
2 Aided by grants from the Fluid Research and Knight Funds. Yale University School of Medicine. ↩