A review of Wisdom of Crowds 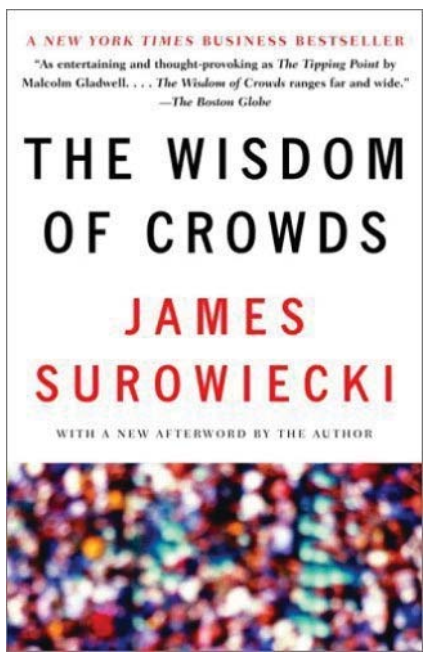 Fast Company calls it an ‘idea-driven narrative’ (Sacks, 2005). This genre, made famous by Malcolm Gladwell, takes a simple (but important) idea and uses research, case studies, and personal experiences to enable the reader to see the world from a new perspective. Wisdom of Crowds, by James Surowiecki, is a notable addition to this enriching genre.

I enjoyed reading this book. The simple idea upon which Surowiecki builds is that, under certain conditions, groups of people make better decisions than any individual could hope to make. There are three conditions: the group must be diverse; the individuals should make their decisions independently; and the people must be decentralized, thus ensuring that decisions are based on local knowledge.

This book is essentially about the theme of complexity, and how group decision-making provides a way of tackling uncertain situations and solving apparently intractable problems. Three types of problems are examined, each with its own chapter:

The first half ofthe book provides the theory, with chapters covering the three conditions and three types of problems. The second half presents a set of case studies that reiterate the key points - with additional factors, pitfalls, and flights of fancy thrown in for good measure. For example, Surowiecki points out that diversity and independence are imp ortant because “...the best decisions are the product of disagreement and contest, not consensus and compromise.” The author’s call for dissent in group decision-making is a recurring theme throughout the book.

It is apparent that Surowiecki has a strong interest in financial matters - as might be expected from an author who writes the popular “Financial Page” for the New Yorker. Much of the research and examples in Wisdom of Crowds has an economic flavor - which would usually have put me to sleep, but which, in this book, was presented in an interesting and fast-paced style that maintains the reader’s interest.

My only criticism is that the second half of the book often takes the reader on circuitous routes. On several occasions the reader begins to wonder what this has to do with group decision-making. When the text does eventually return to the point, the connection is often somewhat tenuous. I was left with the feeling that I had put in the effort to go with the author on his various excursions, but had returned without any really clear pictures of the scenery. However, taking the book as a whole, this is a minor criticism; the fact that I zipped through the book is always a good indicator of how much I enjoyed it.

Wisdom of Crowds has had three major impacts on my thinking: first, I have always intuitively taken opportunities to use group decision-making in my workshop activities, but I now have a logical rationale for its usefulness; secondly, I can now differentiate between group decision - making and collective meaning-making; and thirdly I can understand why, as Surowiecki laments, few organizations have implemented group decision-making - because it removes power from those who have the authority and responsibility to implement the decisions. A book that gets you thinking like this deserves to be highly recommended.