Because of the dromic character of purposive activities, the closed circuits sustaining them and their interaction can be treated topologically. It is found that to the value anomaly, when A is preferred to B, B to C, but C to A, there corresponds a diadrome, or circularity in the net which is not the path of any drome and which cannot be mapped without a diallel on a surface sufficient to map the dromes. Thus the apparent inconsistency of preference is shown to indicate consistency of an order too high to permit construction of a scale of Values, but submitting to finite topological analysis based on the finite number of nervous cells and their possible connections.

The term “reflex” originally meant a disturbance which, initiated by an extra-nervous organ, returned by a nervous path to that; same organ. The law of Bell-Magendie, that impulses enter the nervous system by dorsal and emerge by ventral roots, specified the direction of conduction of these circular disturbances. Circular propagation in this direction was called dromic, in the opposite, antidromic. With the possible exception of phenomena comparable to that described by Porter, no response of any effector has ever indicated an antidromic reflex although conduction in the reverse direction has been demonstrated in both the dorsal and ventral roots.

The term “reflex” has latterly been used of any activity in which one pylon was extra-neural regardless of whether or not it was somatic. Lack of anatomic continuity about the external pylon let aftercomers ignore the essential circularity. All reflexes are dromes, activities of feedback mechanisms, and consequently their function includes all purposive activity.

In addition to reflexes, there exist within the central nervous system reverberating circuits which for brevity are called endromes. Endromes are not in general so related to reflexes as to be uniquely syndromic or antidromic. Their temporal importance in determining the formal properties of nervous activity has been previously discussed (McCulloch and Pitts, 1943). Concerning endromes as well as reflexes, it is well to recall that a given feedback circuit may be regenerative for one temporal combination of excitations and degenerative for another.

Obviously any number of parallel circuits may be utilized by a single drome and these circuits may divide and unite without the disturbance ceasing to be dromic. Anatomically, the nervous components of their paths consist of neurons so related that the disturbance passes from neuron to neuron over a synapse from the axonal terminations of one neuron to the cell body of the next. With questionable propriety, the terms dromic and antidromic have been applied to passage across a synapse in this and the reverse direction respectively. The impropriety arises from the interrelation of two or more dromes. Conduction in each is dromic, in both, syndromic, but from one to the other, whether it facilitates or inhibits, it is properly neither syn- nor anti-, but heterodromic. Without heterodromic activity reflexes would occur independently of one another. It is therefore to these that one must look for sub-, super-, or co-ordination of reflexes; and, therefore, for behavior, including all relevant aspects of purposive activity.

For the following discussion, it is unnecessary to distinguish homeostatic from appetitive activity. One may even ignore the asymmetry of adversion and aversion, but it is essential to remember that the circuit, whether regenerative or degenerative, must be closed for its activity to be purposive. Thus, in its simplest form, any drome maps in a plane as in Figure 1. 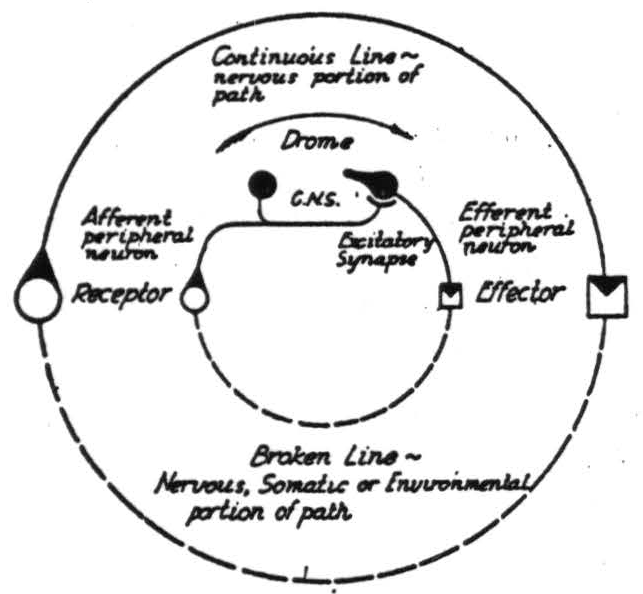 For a theory of valuation to be scientific, it must rest on observation and lead to prediction. Empirically, one must observe choice. Choice implies that two or more potential acts are incompatible. The observation requires some overt act with inhibition of incompatibles. There must then be two complete circuits and an inhibitory, heterodromic influence from the one (for an overt act) to the other (for an incompatible act). The circuit maps as indicated in Figure 2. 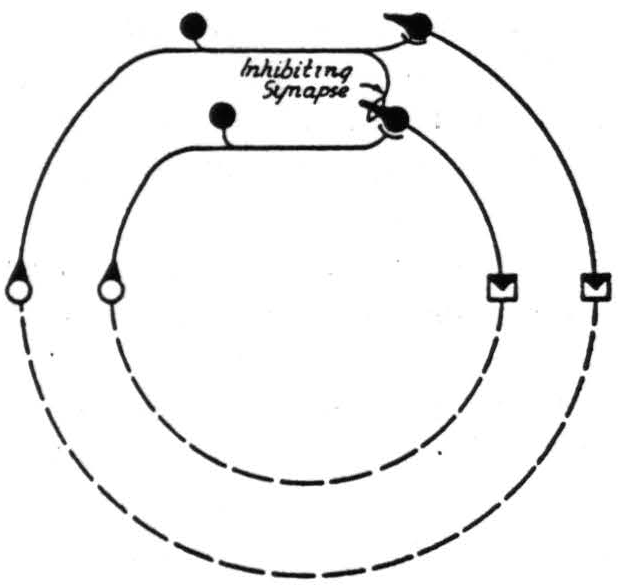 This scheme can be elaborated for any number of circuits arranged in order of dominance of dromes of each over all within it as in Figure 3. 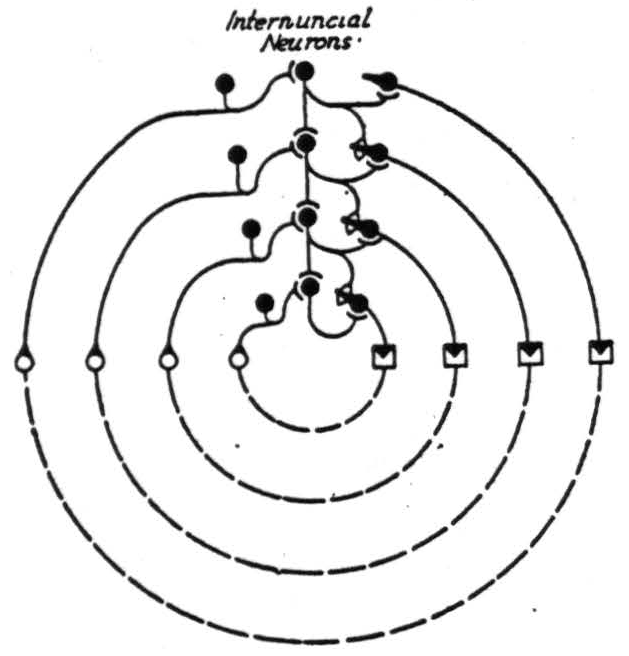 This figure in which heterodromic paths between parallel circuits require no diallels, or “crossovers”, demonstrates that any hierarchy of values indicated by choice requires only a nervous net that maps on a plane. The term “hierarch" in this context has two implications; each drome determines some aim, goal or end, and no two dromes determine exactly the same end. Because organisms live for these ends, they are appreciated by them neither as means to other ends nor as conduct forced upon them, but rather as having that kind of power or importance which culminated in the notion of the sacred or holy—this is the religious implication of “hierarchy” as applied to values. The second implication, arising from the sacerdotal structure of the church, is that the many ends are ordered by the right of each to inhibit all inferiors. The number of ends, although large, is finite. The order is such that there is some end preferred to all others, and another such that all are preferred to it, and that of any three if a first is preferred to a second and a second to a third, then the first is preferred to the third. Logically, therefore, to assert a hierarchy of values is to assert that values are magnitudes of some one kind. Summarily, if values were magnitudes of any one kind, the irreducible nervous net would map (without diallels) on a plane.

Ever since theories of value deserted the inadequate, rational or proportional, Platonic approach, they have been notably inferior to intuition in inferring the outcome of an untried choice. Examination of the theories uncovers that values have been subsumed to be magnitudes of some one kind. Experimental aesthetics, economics, and conditioned reflexology have produced instances in which, under constant condition, preference was circular. One such instance would have been sufficient basis for categorical denial of the subsumption that values were magnitudes of any one kind. Thus, for values there can be no common scale.

Consider the case of three choices, A or B, B or C, and A or C in which A is preferred to B, B to C, and C to A. The irreducible nervous net is shown in Figure 4. 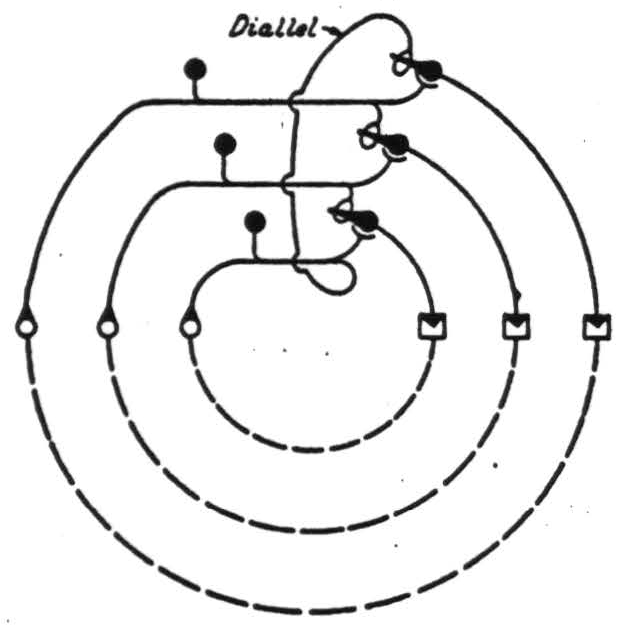 It requires one diallel in the plane. Its three heterodromic branches link the dromes so as to form a circle in the net which is distinguished from an endrome in that it is not the circuit of any drome but transverse to all dromes, i.e., diadromic. The simplest surface on which this net maps topologically (without a diallel) is a tore. Circularities in preference instead of indicating inconsistencies, actually demonstrate consistency of a higher order than had been dreamed of in our philosophy. An organism possessed of this nervous system— six neurons— is sufficiently endowed to be unpredictable from any theory founded on a scale of values. It has a heterarchy of values, and is thus intemectively too rich to submit to a summum bonum.

This investigation has been aided by a grant from the Josiah Macy, Jr. Foundation.

1 Reprinted from the Bulletin of Mathematical Biophysics, Volume 7, 1945. ↩