The social string theory - S2T:
Establishing the ties that bind

After extensive research, we have finally cracked the essential code of social interaction, and have discovered at its core profound and universal implications and applications. It is our considered belief and ultimate conclusion - which this short article will eventually prove - that the S2T describes the very essence of social interaction.

The complexity of the model has kept earlier attempts from constructing a picture that would properly explain the intricacies of these archetypal relationships. With the emergence of S2T, we can clearly understand the true nature of these mindful acts and how they can be reduced down to their simplest and most abstract form.

The S2T model is based on fifteen dimensions collapsed into five. It’s important to grasp that we’re not just connecting the dots, here. From a dimensional perspective, we have the four primary dimensions and in addition have included a fifth that has been often overlooked and previously devalued - we call it here, mind-space. Past generations have referred to this as headspace, but for obvious reasons the connotation of this reference does not serve our purposes here. By including mind-space as the fifth dimension, we can elevate the conversation up and away from earlier attempts to illuminate this primary sentient process.

These fifteen dimensions coalesce when we integrate the five dimensions arising in the past, present and future. Since we are operating in the present, these 15 dimensions collapse down into five. It is crucial to grasp that until we incorporated mind-space / headspace into our equations, we were missing the crucial and missing link. This also explains why the mathematics has remained and continues to remain hidden in the complex interactions of the world it describes.

To more clearly depict this dimensional perspective, let us look at the primary varieties of social interactions. We feel confident that our detailed and exhaustive search of the available literature and our extensive observations of the characteristics detailed in the following relationships, support our claims.

The three primary social interactions in which we see direct evidence of our theory being modeled and explicated, are the Parent / Child Relationship, the Individual / Community Relationship, and the Man-Woman / Man-Man / Woman-Woman Relationships.

It became obvious to us from observing these models and their inherent characteristics, and it should be equally obvious to the critical observer, that the connecting fabric of the Social String Theory, S2T, is guilt.

As the social strings are interwoven to create a tapestry of life’s interactions, we create patterns of emergence held together by the powerful guilt force. Einstein could feel this force all around him, but could never properly measure the preponderance its atomic weight that he felt pressing down on his shoulders.

The S2T manifests itself in our daily lives through the creation of a lineage of guilt. It’s how we interconnect the primordial essence of our universe to develop a culture that lasts beyond the life of the individual. It also explains why the mathematics have remained and continue to remain hidden - because guilt travels from the past, through the present and on into the future. By increasing the guilt, the social strings become more tightly wound and we become more bound to the thinking that is associated with the guilt. This is very important because it binds us to the past and the future. These social strings are what connect us more closely as the guilt is increased. This is evident on Figure 1 below that demonstrates what happens when the guilt goes up and the resultant knotting and tying of the social strings. 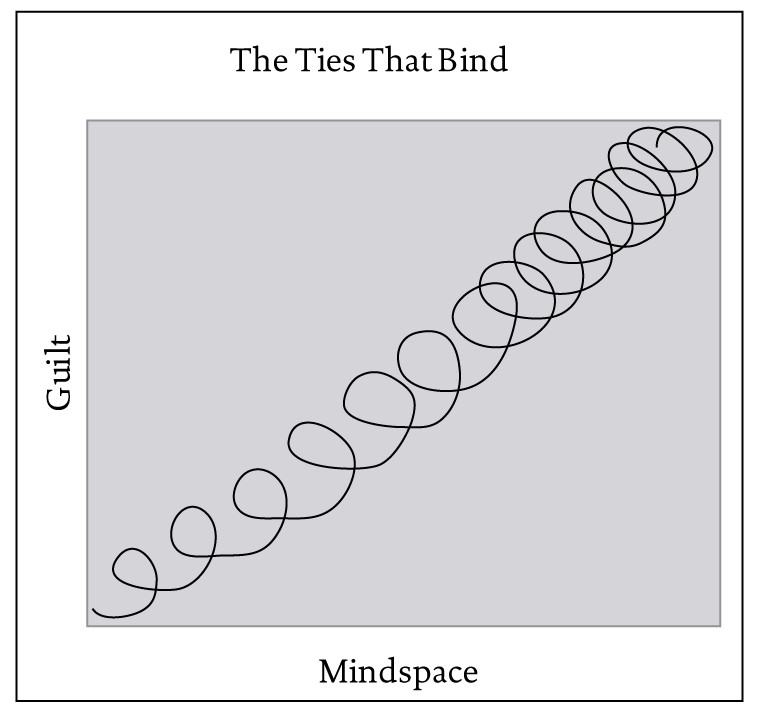 Another key emergent property that has been previously unexplained is the Binding String Factor, or as some in the field have referred to it, the BS Factor. The BS Factor increases as the guilt factor goes up. We have found that this phenomenon is in direct proportion to the degree of guilt that is applied at any point within the interaction.

Closely related to guilt’s Binding String Factor is the Shame on You Factor. SOY Factor is a way we can tightly bind the interactions of people and how they relate to what we think of them. As with most interactive theories, it eventually all comes down to control. This is very important in social interactions. Whoever controls the power is the one who controls the relationship and subsequently the social interaction. We see this most clearly in sado-masochistic relationships, but at this time, we don’t feel it would further our discussion to go into greater graphic detail here. Suffice it to say that there is a certain social string theory here that applies in every social circumstance. Who rules the whip is one of the key social strings that binds.

What should be increasingly clear to both the trained and the casual observer is that the Social String Theory is destined to revolutionize the world of psychology and religion, as well as all other attempts to explain the intricacies of social interaction. It is from this confidence that we assert that the S2T is a direct expression of the real ties that bind every social creature and every social interaction.